Down but not out! This is the theme of Resilient, a new award-winning short film that recorded Tommy Watson’s inspiring journey from a homeless senior in high school to a top football player in America and a strong leader in education. Despite being in foster homes, living in nearly 30 different locations growing up, being homeless and without any parental supervision, protection or support, Watson beat the odds, and earned four college degrees, including a doctorate in education leadership.

During the COVID-19 pandemic and the transition to remote and hybrid learning, homeless students faced tremendous challenges as they strove to learn and achieve in school. “As a nation, we must do everything we can to ensure that all students — including students experiencing homelessness and housing insecurity — are able to access an excellent education that opens doors to opportunity and thriving lives,” U.S. Secretary of Education Miguel Cardona said in a release. To support homeless students to achieve academic excellence, school leaders need funding, resources, and strategies.

As the number of homeless students grows every year across many public schools in the U.S., policymakers should increase awareness of how to better serve them. To help school leaders to better serve this disadvantaged student population, the Center for Public Education (CPE) of the National School Boards Association (NSBA) gathered information from federal agencies, state governments, and academic studies, and conducted research on the following questions:

Who Are Homeless Students?

Homeless students are defined as students who lack a fixed, regular, and adequate nighttime residence, that is, students living in shared housing, hotels or motels, shelters, and unsheltered places (such as cars, parks, abandoned buildings), according to the McKinney-Vento Homeless Assistance Act. As a primary piece of federal legislation related to the education of children and youth experiencing homelessness, the Act authorizes the federal Education for Homeless Children and Youth (EHCY) Program. In 2015, the Act was reauthorized by Title IX, Part A, of the Every Student Succeeds Act (ESSA).

How Many Homeless Students Are Enrolled in Public Schools?

Figure 1. Number and Percentage of Homeless Students in Public Schools

Figure 2. Percentage of Homeless Students Enrolled in Public Elementary and Secondary Schools, by State or Jurisdiction: 2016-17 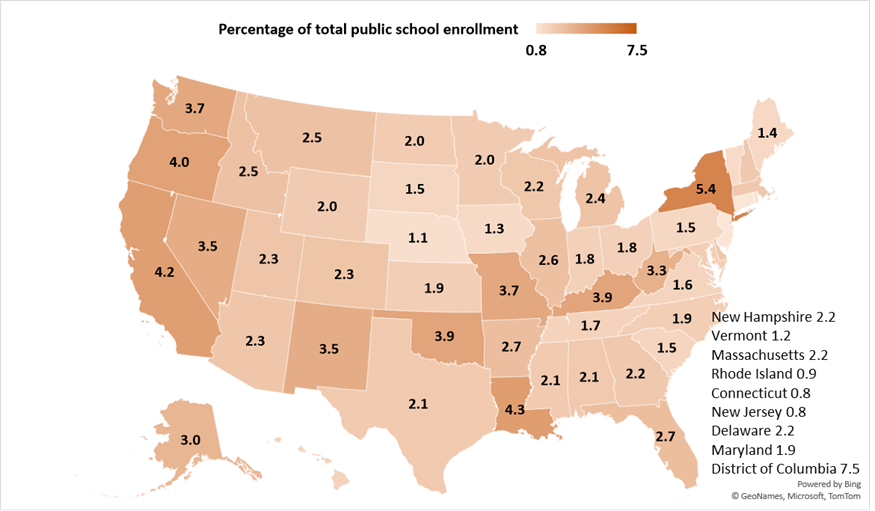 Where Do Homeless Students Live and Go to School?

Geographically, three out of four homeless students live in cities (47%) and suburban areas (32%) (Figure 3). In the 2018-19 school year, approximately 77% of homeless students lived in doubled-up or shared housing (i.e., temporarily sharing the housing of other persons due to loss of housing, economic hardship, or other reasons such as domestic violence); 12% lived in shelters, transitional housing, or awaiting foster care; 7% lived in hotels or motels, and 4% unsheltered (e.g., living in cars, parks, campgrounds, temporary trailers ― including Federal Emergency Management Agency (FEMA) trailers ― or abandoned buildings).

While in many states, about 70% of homeless students live in shared housing, this is not the pattern in Massachusetts, Washington, D.C., New York, Pennsylvania, Wyoming, Nebraska, Minnesota, and Arizona. In Massachusetts, among the 20,872 homeless students, 45% lived in shelters, transitional housing, or were awaiting foster care placement during the 2016-17 school year.

What Are Some Characteristics of Homeless Students? 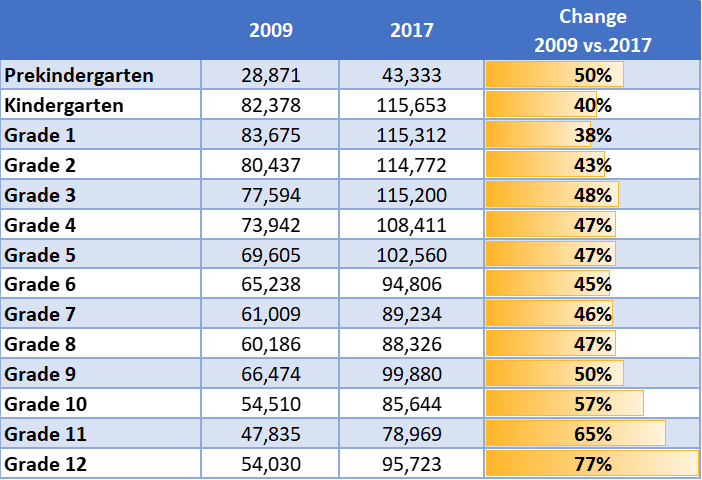 Homelessness is a dramatic disadvantage for students, both physically and psychologically, but some homeless students experience additional hardships and challenges. In the 2016-17 school year: 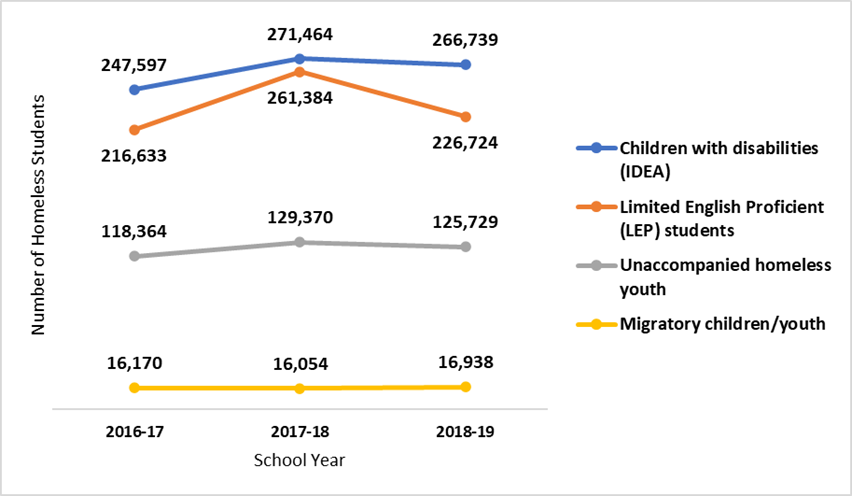 How Do Homeless Students Perform Academically?

Some research shows that only 64% of homeless students graduate from high school, compared to a national average of 78% for low-income students and 84% for all students. According to one report, students experiencing homelessness are 87% more likely to drop out of school than their stably housed peers. Other research states that without a high school diploma, youth are 4.5 times more likely to experience homelessness later in life.

Evidence shows that homelessness is a serious negative factor that affects student achievement. According to a 2019 report about the homeless students in New York City, fewer than one in four (23%) met grade-level standards in English language art (ELA) in the 2016-17 school year, which was almost half the rate of housed students who scored proficient on the ELA assessment (43%). On the statewide math assessment, homeless students also scored proficient at half the rate of their housed classmates (20% vs. 40%).

In the same report, researchers suggested that among homeless students, those living in doubled-up housing were more likely to meet grade-level proficiency standards on their ELA assessment (26%), while those living in shelters were less likely to obtain a proficient score (17%). This trend was also found in the math assessment, in which 24% of homeless doubled-up students scored proficient compared to only 12% of students in shelters.

Chronic absenteeism is often reported as a factor in the low academic achievement of homeless students. Researchers from the University of Southern California examined how homelessness affects students’ mathematics and attendance outcomes within the Los Angeles Unified School District. They found that students who experienced homelessness between fourth and eighth grade scored 0.13 standard deviations lower on math tests and missed additional 5.8 days of school than their peers who never experienced homelessness. “The average eighth-grader in the sample misses 7 days of school, thus homelessness adds almost six additional days absent in a 180-day school year (an 80% increase)” (Gregorio et al., 2020).

What Are Some Funding Sources to Support Homeless Students?

“All students experiencing homelessness are eligible for Title I services even if they are not enrolled in Title I schools,” according to the U.S. Department of Education (ED). Recently, ED is encouraging states to complete their applications for “Round 2 of the American Rescue Plan Act of 2021’s Homeless Children and Youth Fund (ARP-HCY), which will deliver a collective $600 million in additional support to students in dire need this summer and before the start of the school year.”

According to ED, all public school districts must comply with the requirements of the McKinney-Vento Act to identify and serve school-age children and youth experiencing homelessness. Specifically, every state educational agency (SEA) must have an Office of the Coordinator of Education for Homeless Children and Youth, and the SEA must competitively award 75% of its annual allocation for homeless students to local educational agencies at least once every three years.

Figure 5. Grants from the U.S. Department of Education for Homeless Children and Youth Education, by State: 2020 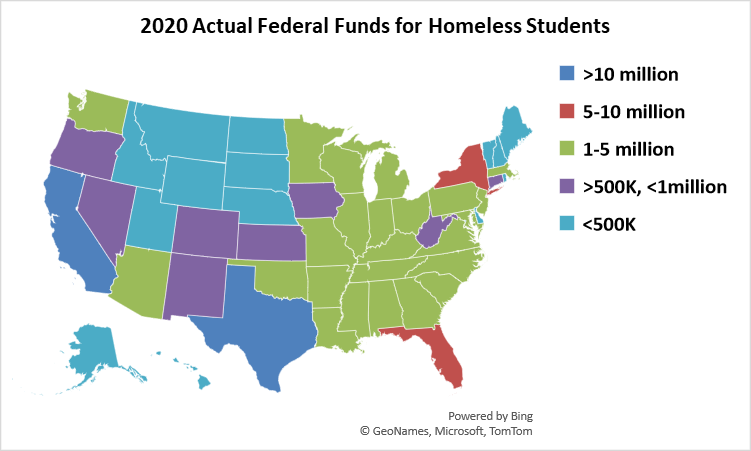 Homelessness has been steadily rising in major cities across the United States. Children under 18 comprise nearly a quarter of the homeless population (Henry et al., 2017). Researchers predict that the economic fallout of the COVID-19 pandemic will likely result in more families facing homelessness, and consequently, large urban school districts across the country face the challenge of identifying and serving an increasing number of homeless students.

During the pandemic, many school districts struggled to serve homeless students. For example:

Another big challenge is how schools can ensure that homeless students have equal access to online learning. According to NSBA, “Widespread home-based learning has highlighted a long-documented and persistent inequity of students that lack adequate broadband access.” This digital divide, commonly known as the homework gap, impacts approximately 1.4 million students who live in shared housing, hotels, shelters, or even in unsheltered places.

Growing up in foster homes, crisis centers, motel rooms, living with family and friends and bouncing around from place to place, Tommy Watson said, “I had no control over my life, so I came to school and tried to control that.” Down but not out — homeless students like Watson are resilient, hoping that education can change their lives. This hope should inspire school leaders and educators to make every effort to serve all homeless students.