The history of education in this country is one of substantive inequities maintained through public institutions. Many of the traditional barriers to black advancement have been outlawed, but the situation today is by no means one of equity.

Although studies have documented the narrowing of the gap in the quantity of education attained by blacks and whites, little has been said about the quality of education received. Obviously, worsening levels of de facto segregation are partly to blame for the gap in quality. As a school board member, I am deeply distressed that various school practices and policies are critical factors contributing to the gap in the quality of education received by black and white students. Among these are tracking, differential assignment to special education, disparities in discipline and suspension of students, and pay-to-participate fees.

Despite some progress immediately after 1964, the level of school segregation for black students remains extremely high and has gotten worse in the Northeast and Midwest. More than half of all black students attend a school that is majority black and less than 25 percent white. Conversely, most white students attend a school that is over 80 percent white and less than 8 percent black.

Beginning in 1986, our public schools started trending toward resegregation, resulting in schools that are more segregated today than in 1970. The relevance of this fact is that numerous studies show that segregated schools are profoundly unequal. Predominately black schools, in sharp contrast to white suburban schools, lack decent buildings, are overcrowded, and have outdated equipment and technology—if they have equipment and technology at all. They do not have enough textbooks for their students, lack library resources, are technologically behind, and pay their teaching, support, and administrative staff less. According to author Jonathan Kozol, these “savage inequalities” have been directly related to lower reading achievement and learning attained by black students.

Even in integrated schools, however, black students contend with discriminatory practices and policies. For example, many studies have found clear evidence of discriminatory practices in tracking within schools. White and Asian students are considerably—and statistically significantly—more likely to be placed in the academic track than comparably achieving African American and Latino students.

According to numerous studies, disproportionate placement in lower academic tracks means that black students receive a less rigorous curriculum as well as less-experienced teachers, and miss the benefits of a weighted grading scale. Moreover, numerous studies demonstrate that black students are punished more often and more severely than white and Asian American students.

NSBA’s Dismantling Institutional Racism in Education (DIRE) initiative has begun studying the persistent discrimination, unequal treatment, and, in some cases, exclusion in education. We have our work cut out for us, but I am confident that 90,000 school board members will begin the difficult work of dismantling racism in our schools. 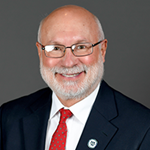