“You can’t really anticipate what the funding will be from year to year,” says Pfender, assistant to the superintendent of the suburban Pittsburgh district and, until recently, its director of student support services. “You have kind of an average that has come in,” she says, “but even that can fluctuate.”

Pfender remembers having to remove staff positions from proposed budgets because their salaries were dependent on IDEA funds. As it turned out, “that money was not coming in.”

That’s a refrain often associated with the historic legislation. Signed into law in November 1975, IDEA began dismantling the barriers to education for children with disabilities by requiring that public schools provide the access and support they need for a high-quality education.

As IDEA enters its 45th year, there is much to celebrate about the legislation. The Council for Exceptional Children (CEC) notes, for example, that “prior to IDEA’s passage, children with disabilities were shunned from school, and plagued by stereotypes, misconceptions, and low expectations. As a civil rights law… IDEA has revolutionized the lives of children with disabilities.”

Approximately 7 million students, ages 3 to 21, with physical, cognitive, and learning disabilities —14 percent of all public school students—currently receive special education services under IDEA, according to the U.S. Department of Education. And two-thirds of those students are taught in general education classrooms alongside their nondisabled peers for 80 percent or more of their school day.

But mixed with the applause for the legislation is frustration that its full potential has yet to be realized because of long-standing underfunding. The federal government’s promised “full funding” contribution—40 percent of the excess costs of educating a student with disabilities—has consistently fallen far short. Federal funding dipped to roughly 15 percent in 2019, the lowest percentage level since 2001. That shortfall leaves already financially squeezed school districts to pick up an even larger share of the special education bill. Like most districts, Upper St. Clair turned to its general fund to pay for those essential but defunded special education staff positions. Officials at South Carolina’s Horry County Schools had to request a budget package of over $1 million from general revenue sources “in order to solely provide the additional personnel needed” for the 2019-20 school year, says Kristin Wilson, executive director of special education and federal programs for the district in the Myrtle Beach area.

The need for such financial maneuvering exemplifies a key challenge faced by districts across the country when it comes to relying on the federal government’s commitment to help them meet their legal obligation to provide students with disabilities access to a free appropriate education in the least restrictive environment.

“I feel like the concept of funding and federal law are not talking to each other,” Pfender says. “It’s a constant challenge for districts to be fully responsive, but fiscally responsible.” 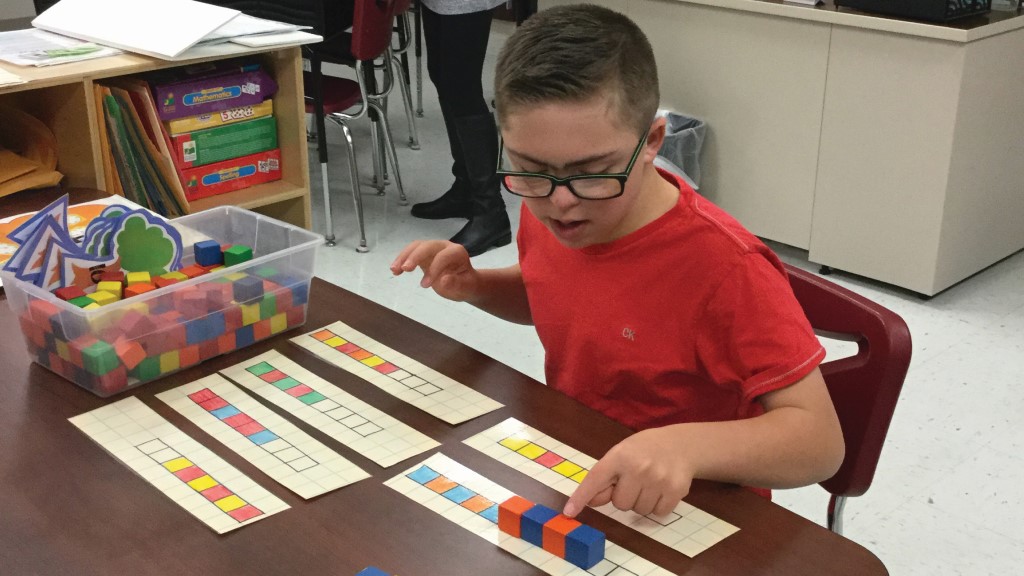 By law, districts are obliged to provide the resources outlined in an Individualized Education Program (IEP)—the written document outlining services each public school child who is eligible for special education will receive—“regardless of their funding situations,” says Jenifer Harr-Robins, who researches special education finance issues at the American Institutes for Research (AIR). “Once those IEPs are developed, they have to be implemented.”

“If full funding for IDEA were provided by Congress, the possibilities to improve public education would be endless,” says Chip Slaven, NSBA’s chief advocacy officer. “Schools across the nation could increase resources for students with disabilities and expand opportunities to do other things that improve public education for all students, such as providing teachers with more robust professional learning, increasing access to high-speed broadband and adaptive technology important for personalized learning, and increasing other vital student supports.”

A 2018 report by the National Council on Disability, an independent federal agency, said that: “Students with disabilities are particularly vulnerable to the adverse effects of funding issues, which can include delays in evaluations or rejection of requests for independent educational evaluations, inappropriate changes in placement and/or services, and failures to properly implement individualized education programs (IEPs).”

Every year when Congress comes back and says that IDEA is going to be funded at the same level as the previous year, that means a cut to school districts. “We have more kids coming into the system, so there’s rising cost and more inflation in the budget,” says Kevin Rubenstein, director of student services for Illinois’ Lake Bluff School District 65 and policy and legislative chair for the Council of Administrators of Special Education.

The stalled IDEA Full Funding Act, introduced in Congress in March 2019 by Sens. Chris Van Hollen (D-Md.) and Pat Roberts (R-Kan.) and Rep. Jared Huffman (D-Calif.), is a recent effort to increase IDEA Part B grants (the primary source of federal funding to states and districts for students with disabilities) over the next decade and fulfill the government’s full funding commitment.

“Every year when Congress comes back and says that IDEA is going to be funded at the same level as the previous year, that means a cut to school districts.”

However, a $1 billion increase for IDEA was successfully included in an FY2020 funding bill (H.R. 2740) passed by the House of Representatives. The funding would represent “a nearly 8 percent increase over 2019’s final IDEA funding and would mean the first increase in the average per-pupil expenditure under the program in five years, after it had been declining for all those years,” according to a statement by Rep. Huffman, sponsor of the funding measure. (At press time, the bill was awaiting Senate approval.)

“This is a momentous time for Congress to pass meaningful legislation that has widespread bipartisan support,” says Slaven. Full funding for IDEA and modernization of the law remain the priority for NSBA membership and “would be a game changer in improving the lives of millions of students.”

One example of improvement would be greater recognition of the changing profile of students served by the law today and the impact on budgets, says Chris Ungar, a school board member for California’s San Luis Coastal Unified School District and a member of NSBA’s Board of Directors. A former special education teacher and administrator, Ungar points to the significant growth in the number of students on the autism spectrum and the specialized support the developmental disability can require.

In Indiana, the Bartholomew Consolidated School Corporation would add staff to bolster its inclusion efforts and target additional resources around students with significant behavior issues. “That’s a group of students we’ve been looking at doing a better job of serving in regular education classes,” says George Van Horn, director of special education.

With 85 to 90 percent of district special education students spending at least 80 percent of their day in the general education setting, a major focus is on providing the supports in the general ed environment that “create a learning environment where those students who are exhibiting some more significant behaviors can be successful,” Van Horn says.

Staffing of qualified special educators and instructional assistants, as well as other needed professionals, such as autism specialists, occupational therapists, and speech-language pathologists, is an often-mentioned sticking point, says Allison Gandhi, a managing researcher in AIR’s special education practice area.

In a recent audit of one large district’s special education program, AIR found the district had only one school psychologist for over 5,000 students, compared to caseload recommendations by the National Association of School Psychologists “in the 1 to 500 to 700 student range,” Gandhi says. School psychologists are essential in conducting the evaluations necessary for identifying students for special education services, she explains.

Large caseloads for special education teachers often can result in IEPs failing to be adequately tailored to students’ specific needs. “You don’t fault the teachers for that when they’re totally overburdened, and they just need to get these done,” she says. “Special educators are clinicians, in a way. It’s important to have enough of them who are trained with the resources and data they need to do their jobs.”

Although staffing, funding, and academic challenges exist, districts continue to find ways to improve outcomes for students with disabilities, such as:

Facilitated IEP meetings. Members of an IEP team (parents, teachers, district representative, even the student in some cases) work together in a process that helps improve communication and problem-solving and reduce conflicts. In some cases, students are trained to facilitate their own IEP meetings. Every IEP meeting at Lake Bluff School District is facilitated, with a trained organizer assisting the IEP team to construct or revise the best educational plan for a student with special needs, says Rubenstein. The process focuses the meeting on a student’s strengths and areas for growth and ties those areas into goals, accommodations, services, and supports, he says. “It’s helped parents see IEP meetings differently, and to engage in a conversation around special education that is very different from what we sometimes experienced in the past.”

Transition planning. This is a formal process for helping students with IEPs prepare for life post-high school. Almost 20 years ago, Horry County Schools introduced an occupational program for the small group of students with disabilities who need to focus on independent post-school employment and living skills. Most students in the district with disabilities complete the requirements for a state diploma with the use of accommodations, modifications, and other support services. Horry’s occupational program added community-based experiences and hands-on workplace learning in a wide range of fields to students’ academic coursework, enabling them to graduate with an occupational certificate that demonstrates their “ability to transition into the work community,” says Wilson. “Because of the phenomenal relationships we have with our business partners, many of our students who exit the program leave fully employed by the businesses they completed their work-based-learning experiences with.” Horry County Schools’ occupational certificate program served as a model for the statewide high school credential signed into law in 2017.

Inventive approaches to inclusive education. For nearly 15 years, Bartholomew Consolidated School Corporation’s approach to including special education students in the general education setting has relied on the Universal Design for Learning (UDL) framework. UDL emphasizes flexible learning environments that can accommodate individual learning differences and providing students with multiple means of representation, expression, and engagement, Van Horn says. For students with more moderate and severe disabilities, the individualized attention that is offered through UDL “has led to an overall increase in student achievement,” he says, while in general education classrooms, “we identify barriers that exist and work to remove them and build in options. I think that’s helped more of our students be successful in general ed.” 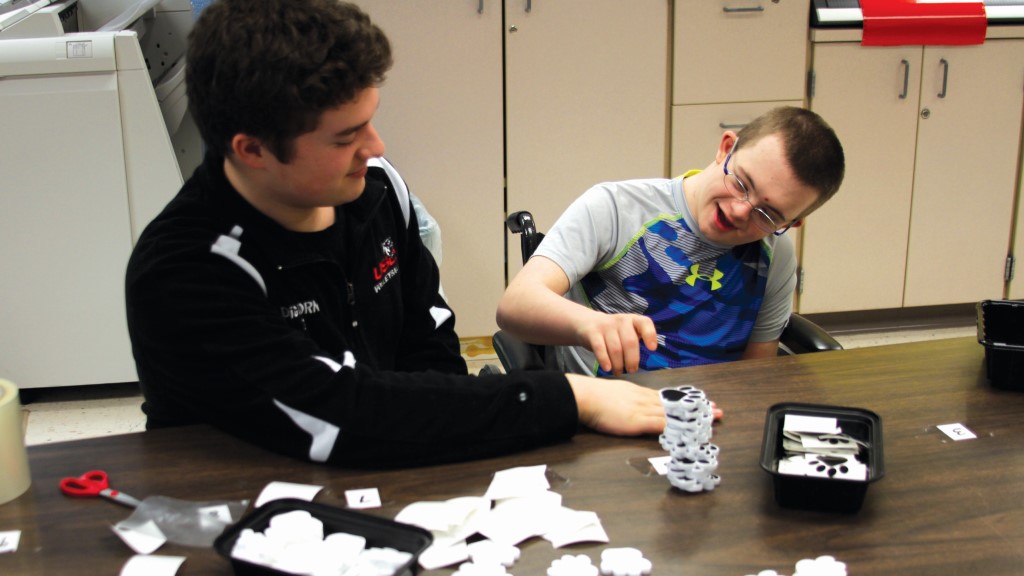 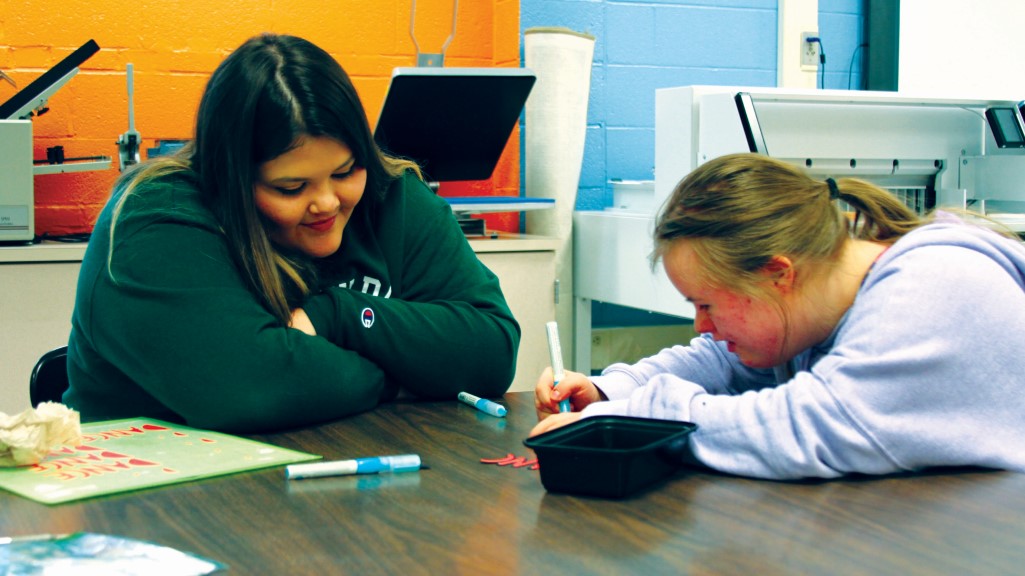 Inclusion and relationship-building have been added benefits of the SHOP@USC (Showing How Opportunity Pays at Upper St. Clair) program. It initially was created to give high school students with severe disabilities the opportunity to operate a student-run business—from the design and production of clothing, greeting cards, and other school spirit items, to marketing and business management. Winner of a 2017 Magna Award, the program is notable not only for its real-world approach to teaching business skills but also for the peer relationships and connections that develop between the special education students and the regular education students who participate in the program. It has been so successful that the district has begun a version for its fifth- and sixth-grade students and is looking to do the same for its seventh- and eighth-grade students.

“Connectivity is so very important in terms of what we believe for all our students,” Pfender says.