When students return to school buildings after the pandemic, “greet them back with art supplies and writing material and music and dance.” This was written by Charlie Wilson, NSBA’s 2020-21 president, in a recent article titled “Children are not broken.” Greeting students back to school with music is a sound and special idea. Because of the pandemic, many music teachers have made great efforts to teach students music online. Perhaps for this reason, the National Association for Music Education entitled this year’s school music month “Music, the sound of my heart.”

During the COVID-19 pandemic, the National Assessment of Educational Progress (NAEP), also known as the Nation’s Report Card, published the results of the 2016 NAEP assessments in music and visual arts. By asking students to observe, describe, analyze, and evaluate works of music, the assessment measures eighth graders’ knowledge and skills in music. However, beyond what the assessment measures, a clear message for the nation is that music should be part of a complete K-12 education.

Music education can nurture students’ perceptual skills, which enable students to hear and interpret the details that make up music, and to recall music in the mind even when it is not aurally present. Through music training, students can also acquire expressive skills, with which students are able to recognize and respond to expression of music when it is present in a work or performance. Based on specific content in music, students are expected to apply knowledge (e.g., the contexts of music, the form and structure of music), and be able to apply what they know to create, perform, or respond to music.

Additionally, music education has a positive effect on students’ math and reading performance. This finding has been reviewed at least in three studies by the What Works Clearinghouse of the U.S. Department of Education’s Institute of Education Sciences.

The NAEP Arts Education Assessment Framework defines music as a form of artistic expression communicated through the medium of sound. Music processes involve analyzing and evaluating, and require students to understand the syntax of music as well as cultural and historical contexts. NAEP intends to assess students’ ability to create when improvising, composing, or arranging music, perform when singing or playing music with musical instruments, and respond when perceiving, analyzing, interpreting, critiquing, and judging music.

The 2016 assessment measured students’ ability to respond to music, which included analyzing and critiquing musical performances, identifying and explaining musical notation, describing the emotion or mood of a composition, and identifying the region of origin or social context of a musical excerpt. The assessment also included one creative question that asked students to use music notation to write an ending to a rhythmic pattern.

NAEP data show an overall declining trend between 1997 and 2016 in students’ achievement in music knowledge and skills (Table 1). For instance, in 1997, about 75%of students could identify the type of instrumental ensemble performing an excerpt, and 66%of students could identify saxophone as an instrument playing melody, but in 2016, these percentages decreased to 65%and 50%, respectively.

Compared with the previous years, however, in 2016, more students performed well in items regarding texture in music. Texture is the way harmonies, melodies, rhythms, and different instrument sounds relate to create the overall effect of a piece of music. The four common texture types are monophonic (a single melody line), polyphonic, homophonic, and heterophonic. In 2008, less than half of the eighth graders could identify the appropriate texture drawing for a homophonic excerpt; but in 2016, more than half of the students could get this item correct.

The data also show that different student groups perform differently in music. In 2016, the national average score in music assessment was 147 points. With this score, students should be able to describe an emotion or mood created by a composition, identify region where music comes from and partially explain its style characteristics, and identify directional contour of part of melodic phrase. As shown in Figure 1, female students performed better than male students. White students, Asian students, and students whose parents had college degrees performed above the national average level. 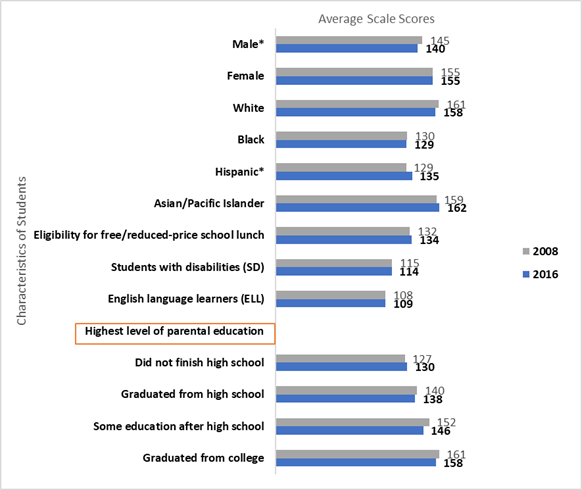 Source: https://www.nationsreportcard.gov/arts_2016/#/music/sample-questions?anchor=section-2
Note: *The difference in the music scores between 2008 and 2016 is statistically significant.

The average score of Asian/Pacific Islander students reached 162, which means that students had more music knowledge and skills, such as providing an accurate and specific comparison between the tone color of two different singers. By contrast, Black and Hispanic students, economically disadvantaged students, students with disabilities, students with limited English proficiency, and students whose parents had high school or less education scored below the national average in the assessment. 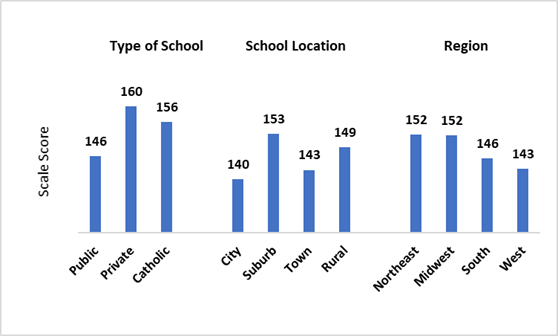 
Not Every Student Has Music Class

Not every state or school district has a curriculum in music. This equity issue needs the attention of policymakers and school leaders. The NAEP data clearly show that students from public schools that provide music education had significantly higher scores than their peers without music education. 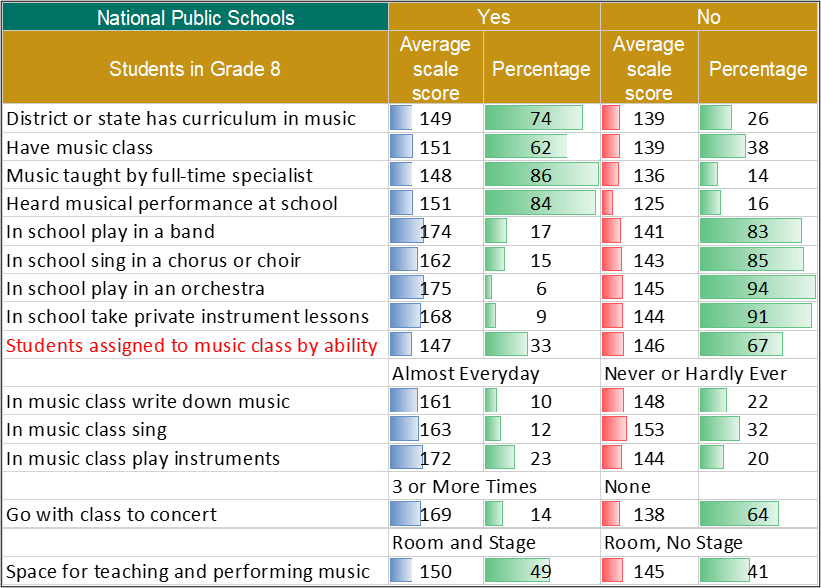 Among students who had music class, about one-third reported being assigned to music class by ability, but these students did not outperform their peers from schools without such policies. While more research needs to be done on whether music education includes every student regardless of the student’s ability, this trend suggests that schools may need to exercise more inclusive practices in music education, and offer every student learning opportunities, such as attending musical performances at school, playing in a band, or singing in a choir in school.

The Homework Gap From the Perspective of Music Education

According to the NSBA’s Homework Gap campaign, “widespread home-based learning has highlighted a long-documented and persistent inequity of students that lack adequate broadband access.” This digital divide is commonly addressed as the homework gap. The data show that students without access to internet or computer at home performed significantly lower in music than their peers with the access (Table 4).

The essence of closing the homework gap is to create more learning opportunities for every student outside school. While the lack of access to digital learning at home affects student achievement in every subject, including music, other home learning environments may also contribute to the homework gap. The NAEP data show that students with more learning opportunities (e.g., listening to a musical tape, CD, or record outside school, talking with family or friends about music, playing an instrument or singing in a choir outside school) had higher music scores than their peers without those opportunities.

School Transformation and “Creating a Bright Future Through Music Education”

The NAEP data show that, nationwide, more than one third of eighth-grade students (38%) would like to be a musician when they grow up, and their music scores, on average, were significantly higher than their peers’ who did not. Nearly two thirds of eighth graders (64%) said that they like to play music alone or with others, and on average, their music scores were 15 points higher than their peers’ who thought otherwise. As researchers state, “interest is a powerful motivational process that energizes learning, guides academic and career trajectories, and is essential to academic success.”

Make learning personal, interesting, and meaningful. This should be an important goal of public education. In October 2020, NSBA launched an initiative — “Public School Transformation Now!” – to start an ongoing conversation around reinventing school, closing the gap in education opportunities both in and out of schools, supporting disadvantaged students through personalized learning and teachers’ professional improvement. This initiative has attracted school leaders, educators, and national education experts, including experts in music education.

“Creating a bright future through music education” is a vision of the CMA Foundation that has been investing in music education since 2006. The passion for improving and sustaining music education programs came from a group of artists and industry professionals who first fell in love with music within the four walls of a classroom, and who were able to go after their dreams thanks to their teachers who believed in them. For years, the organization has provided free resources for schoolteachers. During the pandemic, the Foundation posted numerous lesson plans for online teaching.

In summary, the NAEP data about music education in public schools provide new insights into equity, access, and innovation for each student. Music education can create a bright future for every student, and should play a role in school transformation. It is not just about raising the next generation of musicians, but leveraging the impact that music has on students.