One of today’s most certain variables in a school district’s strategic planning is uncertainty. According to the National Center for Education Statistics, the data arm of the U.S. Department of Education, on average, student enrollment is expected to increase 3 percent between 2015 and 2027. But statistics collected by the Western Interstate Commission for Higher Education (WICHE), a nonprofit agency that predicts high school enrollment to help colleges plan for future students, suggest a steep decline in student enrollment—to the tune of 8.5 percent. Either extreme relies on speculation regarding birthrates, immigration policy, and individual families’ choices in increasingly competitive systems.

We report on an enrollment strategy tested by a large urban district in the Midwest. This diverse district has large shares of students from low-income families and a significant immigrant and refugee population. It has experienced steady declines in enrollment. Declining enrollments squeeze stagnant budgets and force difficult administrative decisions. To fill classrooms and save on personnel costs, the district began what we refer to here as a split-classroom enrollment strategy. We describe the strategy and underlying rationale and offer evidence of the strategy’s initial effects.

In their 2014 collective bargaining agreement, the district and its teachers union agreed to define and implement class size target ranges. For example, the 2014 contract specifies that a kindergarten classroom must contain between 22 and 26 students (ranges are lower for high-poverty schools) while a fourth-grade classroom should aim for 25 to 29. The union (and many parents) favored filling classrooms to the lower end of each range. The district, tasked with appropriating limited resources, sought to fill each class to the top of each range.

In 2018, with the district’s support, we began to explore the influence of split classrooms on school and district enrollment. Armed with data on the number of total classrooms, the number of split classrooms, class-size averages by grade level, and grade and school enrollments, we created student cohorts (groups of students based on the year that class would have started kindergarten) and indicators to mark the length of time before and after the introduction of a split classroom for that cohort. We have data ranging from five years before a split (if a split occurred in 2018) to two years following a split (if that split occurred in 2016), which allows for an examination of the relationship between classroom splits, class size averages, and grade and school enrolments both leading up to a split and after a split occurs.

The distribution of cohort-year observations was:

For each cohort we charted the following school-year-grade observations:

To assess the influence of the split-classroom strategy on class size and enrollment, we ran a series of regressions controlling for class size before and after a split classroom was introduced. Then we compared classrooms that ever experienced a split to those that maintained single-grade classrooms throughout the period of study.

Though model results differ slightly, both tell the same story: lowered or declining class size in cohorts will eventually experience a split. In part because we have more observations of schools before the introduction of a split classroom than after, it is difficult to isolate whether the addition of the split classroom contributes further to a decline or simply does little to counteract an existing trend.

Therefore, as an additional robustness check on results, we then ran the same regressions, adding in school-cohorts that never experienced a split classroom in the 2013-2018 span of our dataset. On average, split classrooms have more students than non-split classrooms and classrooms one or two years prior to a split have a smaller class size than classrooms in the year that they split (as we might expect given the district’s intent with this combined grade strategy). The same trends we saw above are again apparent throughout a series of models, including split and non-split classrooms, year fixed effects, and controls for year and grade (Models 3, 4, 5, and 6).

Class size effects are intuitive as split classrooms combine under-enrolled classes to ensure full classrooms. Next, we run the same regressions as above, changing the dependent variable to enrollment (the total number of students in any school-year-grade) to gauge the influence of the split on overall grade level enrollment over time. As above, first we examine only school-cohorts that experience a split classroom between 2013 and 2018. We explore models that include school fixed effects to control for differences in enrollment between smaller and larger schools as well as a model in which we add controls for grade and grade year (Models 7 and 8). In both instances, as with an examination of a split’s influence on average class size, we see enrollment declines leading up to the introduction of a split classroom and significantly lower enrollment two years after a split.

Next, we again examine enrollment as an outcome but add schools and years, regardless of whether they had a split classroom (first utilizing a model with school fixed effects then adding in controls for year and grade level). The same pattern, declining enrollment which continues to decline post-split, is once again apparent (Models 9 and 10).

In the two final models, we explore the potential influence of split classrooms on enrollment schoolwide. In our first model (Model 11) in which we employ only school fixed effects, schools that have a split classroom have significantly lower enrollment school wide. Enrollment in these schools is higher in the three to five years prior to a split but lower in the year immediately prior to the split and the two years following the split.

In all our analyses, it appears that the two to three years (and sometimes more) leading up to the introduction of a split classroom are where we can observe statistically significant differences in class size and enrollment. In several cases enrollment is significantly lower in the years immediately following a split.

We have only two years of data for schools that are post-introduction of a split classroom, and there are only a few schools that experienced a split in the initial year in which the strategy was employed. Therefore, we have few post-split observations. The fact that we already see significant effects on those cohorts that are two years post-split, even with limited observations, suggests that we might see even more significant effects if we had more data or continued to track these schools in the years post-split.

Table 1: Average Class Size as a Function of Split Classroom and Years to Split 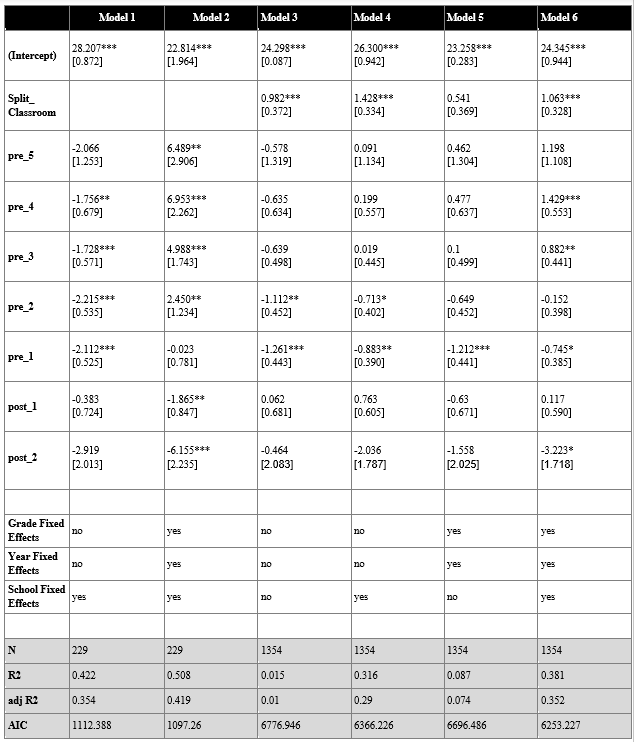 Table 2: Grade Level Enrollment as a Function of Split Classroom and Years to Split 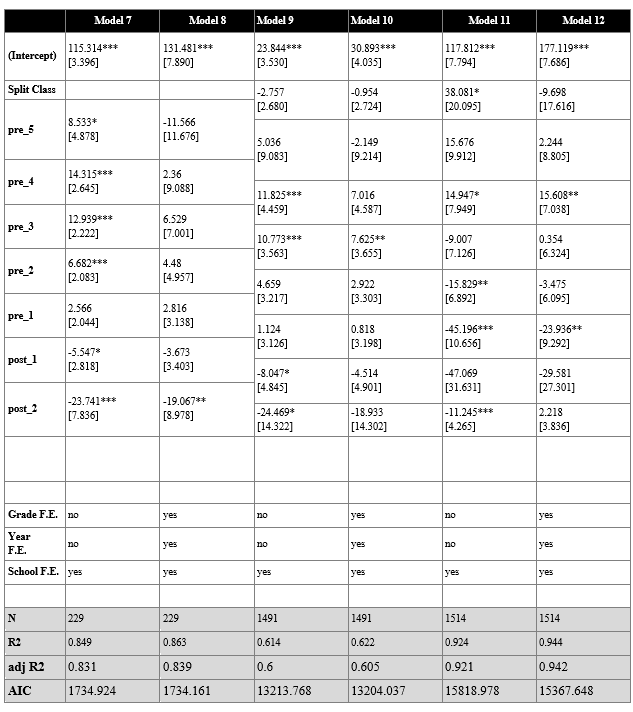 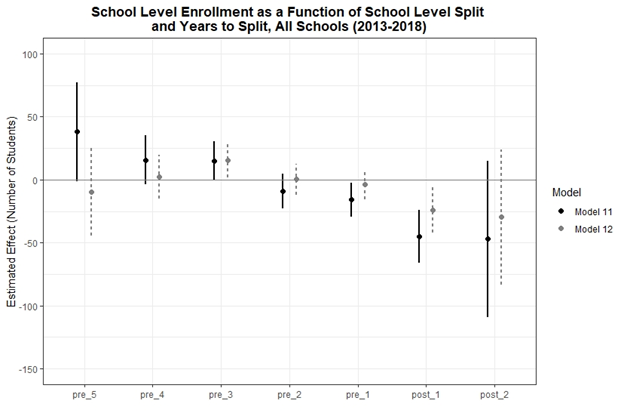