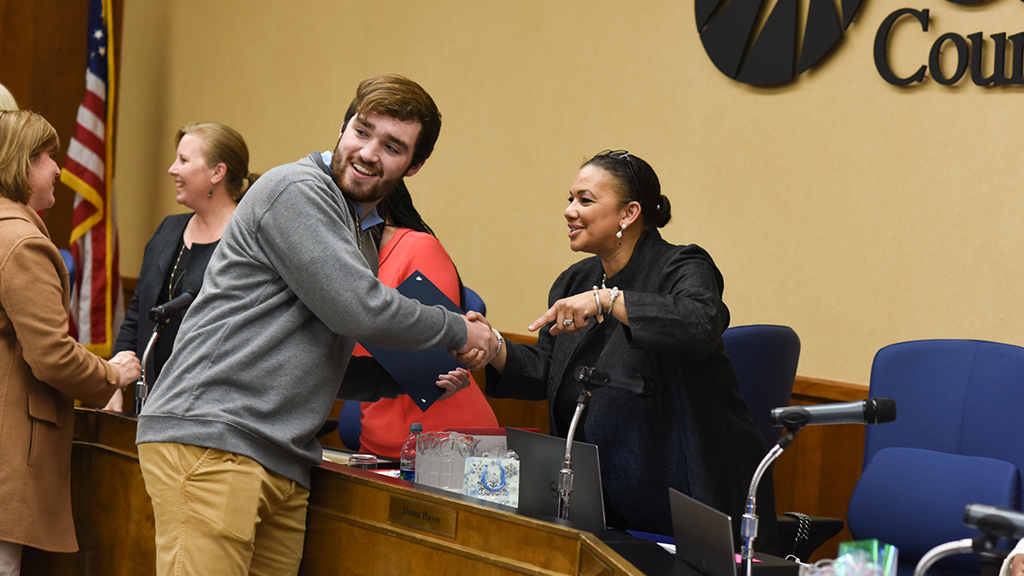 Deena A. Hayes, chairwoman of North Carolina’s Guilford County Board of Education, is nationally known for her work helping institutions and organizations address issues of implicit bias and structural racism. That work, she says, is deeply entwined with and offers valuable insights into her role serving Guilford County schools.

“I can’t image being on the school board without having had the opportunity to be taught and to continue to learn about the manifestations, the origins, and the presence of race and racism in our school system,” Hayes says. “There are questions I never would have asked, there’s data I would never have requested, and analyses that I could not have made.”

Equipped with questions, data, and analyses, Hayes has championed systemic approaches to improving racial equity in the approximately 72,000-student district that encompasses two of North Carolina’s largest cities—Greensboro and High Point. Since first being elected in 2002, Hayes has focused on eradicating gaps in access and achievement for children of color, children living in poverty, English learners, and children who have a disability.

Hayes’ passionate, knowledgeable, and effective activism around educational equity has earned her the 2019 Benjamin Elijah Mays Lifetime Achievement Award. Presented annually by NSBA’s Council of Urban Boards of Education (CUBE), the award honors individual school board members for their commitment to the educational needs of urban schoolchildren.

The award is named after Benjamin Elijah Mays, a long-time member of the Atlanta Board of Education who tirelessly worked to provide equal educational opportunities for children.

“On behalf of NSBA, I congratulate Deena A. Hayes on this recognition,” says Thomas J. Gentzel, NSBA executive director and CEO. “We applaud her commitment to supporting and advancing educational opportunities for all students in Guilford County Schools, along with her distinguished work addressing issues of diversity, inclusion, and equity education.”

Adds CUBE Chair Jacinto Ramos Jr., who is president of the Fort Worth Independent School District Board of Trustees in Texas: “It is an honor to recognize Deena Hayes with the Mays Lifetime Achievement Award.” Her work on behalf of public schoolchildren “is civil rights work and truly represents the legacy of the award’s namesake, Mr. Benjamin Mays.”

Chair of the Guilford County Board of Education since 2018 — and the first woman to ever hold the position — Hayes leads the district’s Racial Equity Committee, which focuses on eradicating systemic gaps in access and opportunity via policy development, disaggregated data analysis, systems change, and ongoing professional learning.

Attacking a systemic problem requires a systemic or “groundwater approach,” she says, employing a metaphor used in her work as co-founder and managing director for the Racial Equity Institute. The alliance of trainers, organizers, and institutional leaders provides workshops and seminars for individuals and groups who want to create racial equity within their companies and communities.

“If you pass a lake every morning and one day see a fish floating belly-up dead, it makes sense to ask what’s wrong with the fish,” Hayes says. “But if you go by the lake one day and see half the fish in the lake floating belly-up, it’s time to start asking questions about that lake, about what’s going on with the water.”

“Ms. Hayes is a walking encyclopedia of knowledge when it comes to racial equity, structural racism, and implicit bias; and she loves to share [this] knowledge with anyone who will listen,” writes state Rep. Amos Quick in a letter nominating Hayes for the Mays Award.

“As the first African-American female to chair the [board], Ms. Hayes has not only been historic, but also effective in leading the third-largest school system in the state of North Carolina to tremendous accomplishment, while facing challenges without fear or hesitation.” Quick previously served on the Guilford County School Board.

Other accomplishments cited include an overhaul of district policies in partnership with the North Carolina School Boards Association focused on improving student academic achievement; investing in professional learning and curriculum development, including the purchase of culturally relevant instructional materials; and commissioning “a groundbreaking” study that analyzed historical and current racial inequities that contribute to persistent gaps in student achievement.

Hayes “has taught her colleagues on the board a lot about systemic inequities in the educational system that need to be addressed to support our children with their experience in our schools,” says a nomination letter by attorney Alan W. Duncan, the former Guilford County Board of Education chair who is now with the North Carolina State Board of Education. “Deena is a difference-maker,” Duncan writes.

When Hayes first ran for the school board, it was at the urging of others in the community, she recalls. “I was really nudged and mentored, and identified, and asked to run for the seat.” She continues today that tradition of identifying and encouraging others to run. “That we have to groom and develop leadership is just a principle of community organizing so that you strengthen and deepen the work,” she says.

In a nomination letter, the Rev. Julie Peeples of Congregational UCC Greensboro describes Hayes as “a clarion voice for quality education, for the children and parents, for a better, more just and equitable community.”