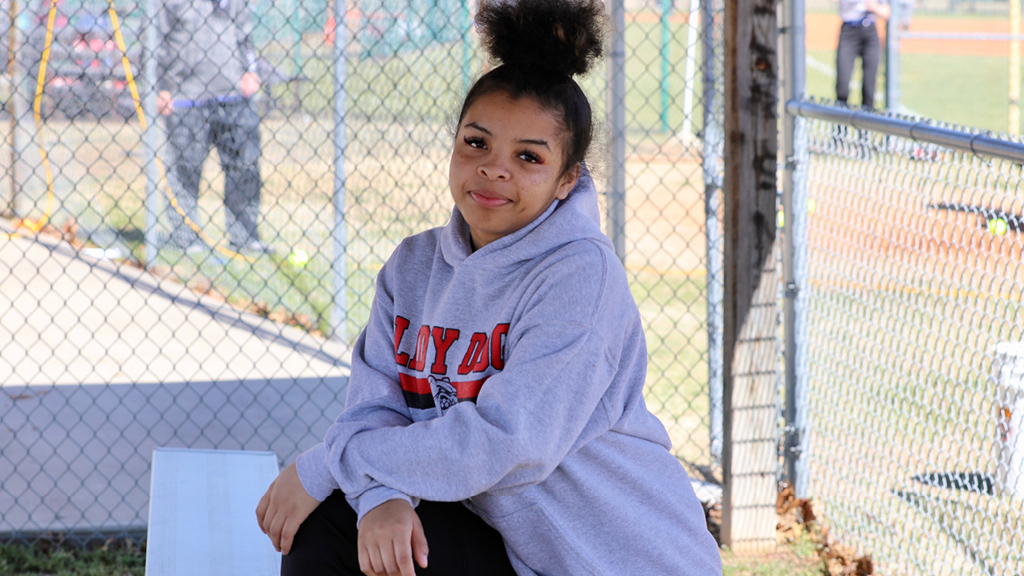 Tatiyona Harris is sitting near the dugout in her softball uniform, talking matter-of-factly about the pandemic and her plans after high school.

“I want to be a psychiatric nurse when I graduate as salutatorian,” the self-described “social butterfly” says as her teammates warm up for a tournament in Okmulgee, Oklahoma. “I like the idea of studying people who are basically like me and helping other people get through what I’ve gone through.”

Harris knows she’s lucky she is not a statistic. In the fall of 2020, the then-freshman at Okmulgee High School tried to take her life and had to be hospitalized in a Tulsa psychiatric clinic 40 miles away.

According to a survey published in late March by the Centers for Disease Control and Prevention (CDC), 4 in 10 teens feel “persistently sad or hopeless,” and 1 in 5 have contemplated suicide over the past year. The American Academy of Pediatrics says teens are struggling with “soaring rates of depression, anxiety, trauma, loneliness, and suicidality.” Suicide is the second leading cause of death for Native youth ages 10 to 24 and is almost three times higher than the national average, according to the Suicide Prevention Resource Center.

“Mental health has always been there in schools but bringing more awareness to educators and peers and parents is the thing,” says Beaver, who works for the Department of Indian Affairs and has four additional children. “One of the benefits of COVID is that it has brought mental health to the forefront inside the school and in the community. Everyone here now is focused on the needs and the stressors of children in schools.”

Pre-pandemic, concerns about teen mental health nationwide were on the rise. From 2009 to 2019, the percentage of adolescents who reported having “persistent feelings of sadness or hopelessness” jumped from 26 percent to
37 percent, according to the CDC. That number rose
to 44 percent in 2021.

“The pandemic was really hard on my mental health,” Harris says. “You couldn’t leave your house. You couldn’t see anybody. Not being able to socialize, I had more time to get into my head, and I spiraled. My thoughts just got really bad.”

Kathleen Ethier, who leads the CDC’s division of adolescent and school health, believes schools play a critical role in youth mental health. During a news conference announcing the survey findings, Ethier said schools can be “a protective factor” for students by helping them feel connected.

“School connectedness is a key to addressing youth adversities at all times—especially during times of severe disruptions,” Ethier said. “Students need our support now more than ever, whether by making sure that their schools are inclusive and safe or by providing opportunities to engage in their communities and be mentored by supportive adults.”

Okmulgee, which has three schools that serve 1,130 students, is the headquarters of the Muscogee (Creek) Nation, which provides wraparound services to Native American families. But those services weren’t available at the start of the pandemic, when COVID-19 forced the nation’s administrative offices to close for months.

The district’s students, 60 percent of whom are American Indian/Alaska Native, lost numerous family members while dealing with long-standing issues of poverty, food insecurity, and ongoing trauma. After five months of no classes and a year in a hybrid virtual/in-person setting, students returned to school full time for the 2021-22 year, but enrollment remains below pre-pandemic levels.

“COVID has hit our kids hard, in many ways,” Superintendent Renee Dove says. “Many of our kids are struggling.”

Dakota and Breanna Bevenue, siblings who attend Okmulgee High, have faced a lifetime of struggle. The two have lived with their grandmother, Melvern Bevenue, since their parents lost custody when Dakota was 2 and Breanna was 8 months old. Both parents have been in and out of prison.

“It was a lot of domestic violence and drugs,” says Melvern Bevenue, a Muscogee citizen who is now 70.

The three are sitting in a conference room after school. Breanna, who is president of the school’s Future Farmers of America chapter, brought her grandmother and brother into the conversation to talk about the family’s struggles. The gregarious sophomore has long dealt with multiple issues, including ADHD, anxiety, depression, and PTSD, and wants to “shine a light on mental health.”

“My outlet is helping other people feel better and communicating and socializing,” Breanna says, noting the loss of connection during the pandemic was a setback for her in numerous ways. “With that being literally ripped away, it just sent me into a downward spiral. It was just really horrible. I did not have any motivation, and it’s taken me a long time to get it back.”

Dakota, a senior who also has ADHD, fell behind in school and has struggled to catch up as graduation nears. “I had to get in the car to do my own work because there’s so much going on in the house. I couldn’t focus,” he says. “I had the motivation. I just couldn’t focus. COVID really messed us up, man.”

Both siblings talk about the need to connect to their classmates. For them, being in school is both an outlet and a sanctuary, a place to forget the trauma and the loss.

“One of the things that was hardest on me was we couldn’t visit family, and so many family members of ours died during that time,” Breanna says. “Some funerals we just couldn’t go to. We only got to go to two, I believe, out of how many?

Beaver also lost numerous family members to COVID, especially in the early days of the pandemic. She opted not to attend most of the funerals, worried about the safety of her family, three of whom were in high school at the time.

At the start of the pandemic, Beaver says her middle child was showing “different characteristics of anxiety and anger and stuff like that,” but she didn’t realize how serious Harris’ depression was.

“She is so outgoing and likes to be around her friends. They hang out all the time,” Beaver says. “She’s hardly ever home because she has so many things she likes to do, between her studies and her extracurricular activities. She would live at school if she could. I think the pandemic did impact her and other kids in more ways than we could have imagined or expected or been ready for. I just feel lucky.”

“When it happened, nobody really talked about mental health around me,” she says. “Now, my friends know if they are really going through it, they can come to me and ask me for advice. Our school counselor makes it a very comfortable setting to talk about mental health, so that makes it easier too. It’s not such a weird thing to talk about anymore.”

Glenn Cook (glenncook117@gmail.com), a contributing editor to American School Board Journal, is a freelance writer and photographer in Northern Virginia.