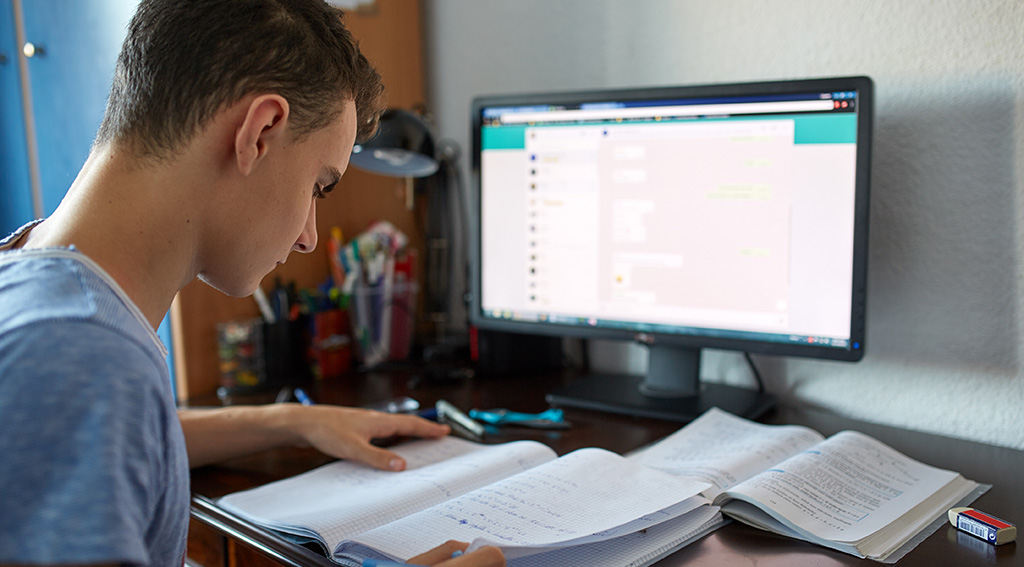 Ongoing federal funding initiatives, including one with an application filing window that closed May 13, are helping bridge the homework gap for the millions of U.S. students who lack the broadband access needed to conduct online schoolwork at home.

Two years after COVID-19 first disrupted the nation’s education system, an enduring legacy is the need for reliable home internet access for student success. Those without access are at an academic disadvantage as today’s teaching and learning rely heavily on internet-based resources.

To help connect more students to off-campus learning, the Federal Communications Commission’s (FCC) third filing window for Emergency Connectivity Fund (ECF) support—April 28 to May 13—will provide at least $1 billion to eligible schools and libraries to purchase laptop and tablet computers, Wi-Fi hotspots, modems, routers, and other equipment and services.

In announcing the filing window in March, the FCC said that given past demand, this would be the last opportunity for eligible applicants to make requests before the $7.17 billion ECF program funds are exhausted.

“Congress has provided more broadband funding over the course of the pandemic, and even the last few months, than we’ve really ever seen before,” says Reg Leichty, a founder and partner at Foresight Law + Policy and a consultant on broadband access. “And that includes dedicated funding for connecting students and instructional staff, but also new investments in the infrastructure needed to reach rural families better. It’s an exciting time.”

Not news to educators

Before the pandemic, as many as 16 million of the nation’s 51 million K-12 students did not have adequate access to the internet to learn online at home, a March 2020 analysis by Common Sense Media found. It also found that 300,000 to 400,000 public school teachers—almost 10 percent—lacked adequate internet or computing devices at home, affecting their ability to conduct classes remotely.

One out of three Black, Latino, and American Indian/Alaska Native households lacked high-speed home internet access, making children in those homes “more likely than their White peers to be disconnected from online learning,” according to an analysis by the Alliance for Excellent Education, the National Indian Education Association, the National Urban League, and UnidosUS published in July 2020. It also found that 2 out of every 5 families in rural locations lacked access to high-speed home internet service.

“The pandemic really put a spotlight on what educators already knew. That was that there’s a homework gap, and it disproportionately impacts students historically marginalized,” says Phillip Lovell, associate executive director at the education advocacy nonprofit, All4Ed (formerly the Alliance for Excellent Education). “While this was not news to educators, it took the pandemic for there to be serious federal action to respond to it.”

As a member of All4Ed’s Future Ready Schools initiative, NSBA has been among those urging Congress and the Biden administration to close the digital connectivity gap. NSBA has emphasized that lacking access to or the ability to afford broadband services obstructs academic success and engagement with innovative instruction options—such as personalized learning—that promote 21st-century life and work skills.

Created as part of the American Rescue Plan Act of 2021, the ECF is a critical piece of federal support to address the homework gap and provide more students with access to the broadband and devices they need to conduct schoolwork outside of school.

Think of it like the hugely successful E-rate program, which provides discounts to assist schools and libraries in obtaining affordable telecommunications and internet access, Lovell says. ECF is “essentially E-rate for home internet access,” but administered by school districts “who know which of their kids are in need and know where the kids are.” It allows “the school districts to make the arrangements with the telecommunications companies to provide the homeowner access and the devices,” he explains.

Districts can spend up to $400 per laptop or tablet and a maximum of $250 for Wi-Fi hotspot devices for off-campus use by students, school staff, and library patrons who would otherwise lack sufficient connectivity to engage in remote learning. Other equipment and services may be deemed reasonable by the Universal Service Administrative Company (USAC).

In response to petitioners’ requests, in February, the FCC pushed back the deadline for ECF recipients to spend their funds by 12 months to June 30, 2023.

“You had districts saying, ‘Listen, we’ve got this money earmarked. It’s just not out the door yet, because we haven’t gotten what we were promised,’” says Susan Gentz, a partner at K20Connect, an education leadership, technology, and policy consulting group.

Congress provided another $14.2 billion to the FCC to address the homework gap via the Affordable Connectivity Program (ACP). Included in the Infrastructure and Jobs Act, the ACP is a successor to an earlier program, the Emergency Broadband Benefit. The ACP offers support to low-income individuals and low-income households meeting the requirements for specific assistance programs, including SNAP, Medicaid, WIC, and others. Participants in Tribal-specific programs, such as Bureau of Indian Affairs General Assistance, the Tribal TANF assistance program, and the Food Distribution Program on Indian Reservations (FDPIR), also are eligible.

Eligible households can receive a $30 per month subsidy for broadband or $75 a month for houses in tribal communities. It also gives eligible households a one-time $100 credit for a device to connect to the internet if they contribute more than $10 and less than $50 toward the purchase price.

“Eligibility is certainly broad,” Lovell says, and includes any household at or below 200 percent of federal poverty guidelines.

The program is not student-specific, and the benefits aren’t as generous as those associated with the ECF, “but obviously, it helps many students and their families indirectly,” adds Leichty.

To receive the connected device discount, consumers need to apply for enrollment in the ACP via the FCC website or with a participating internet provider that offers connected devices. The internet company provides the discount to the consumer.

At the beginning of the pandemic, the first few emergency relief bills approved by Congress did not include dedicated programs for connecting students to broadband. However, Congress allowed federal Elementary and Secondary School Emergency Relief (ESSER) and Governor’s Emergency Education Relief (GEER) funds for education-related broadband initiatives.

“It was one of the many eligible uses of ESSER and GEER,” says Leichty. “The challenge was that school districts had many other emergency expenses competing for those dollars.”

While broadband affordability is often a significant hurdle, in some communities an equally pressing problem is often broadband availability. “The physical infrastructure might be insufficient to deliver the broadband speeds that are needed for learning,” Leichty says. And in some cases, “for whatever reason, the market just hasn’t built out the infrastructure sufficiently.”

To address these hurdles, Congress passed the Infrastructure Investment and Jobs Act which provides $65 billion for broadband infrastructure and access programs, including:

“The BEAD program represents a major opportunity to close the digital divide via formula grants to states for highspeed broadband deployment in underserved or unserved communities,” Leichty says. At press time, the program’s administrator, the National Telecommunications and Information Association (NTIA), was still working on details for distributing the funds. NTIA had recently completed a series of public listening sessions to help inform those decisions.

Leichty also notes that the FCC is completing a broadband mapping initiative “that will provide a much clearer picture later this year about what current connectivity levels look like” across the country.